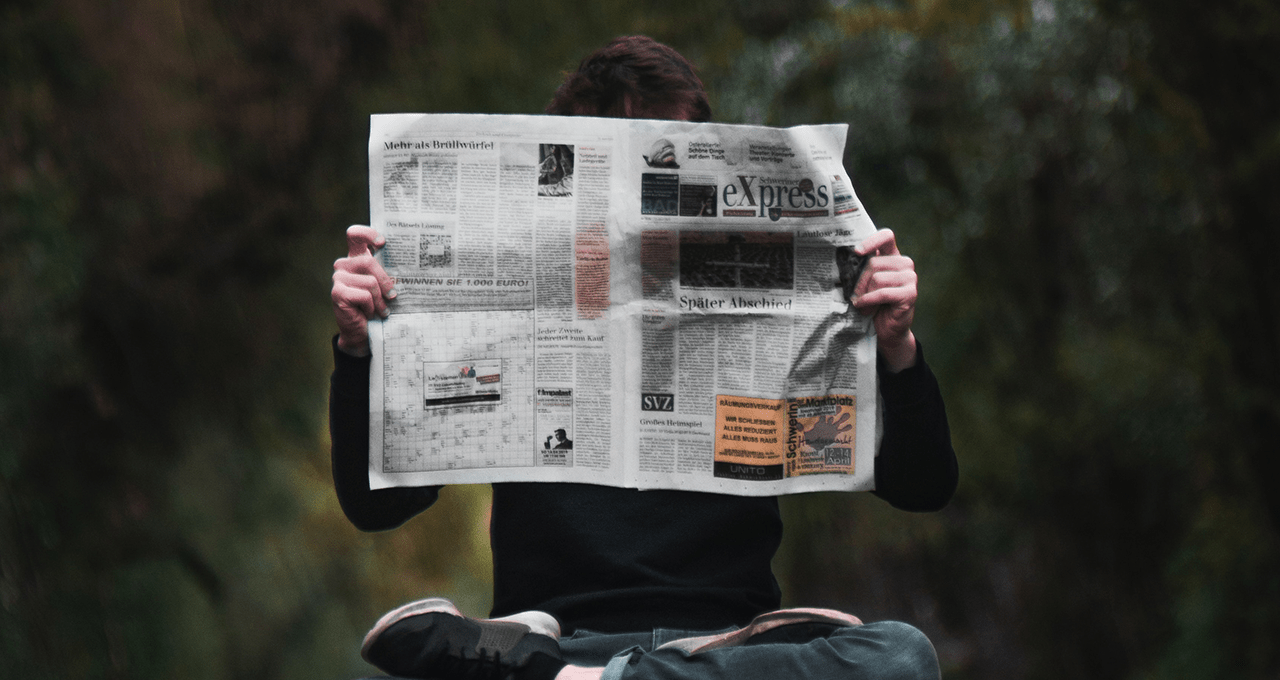 Springboard’s footfall benchmarks are the most extensive and up to date within the industry and trusted by the media (BBC, Sky and ITV) and UK government. 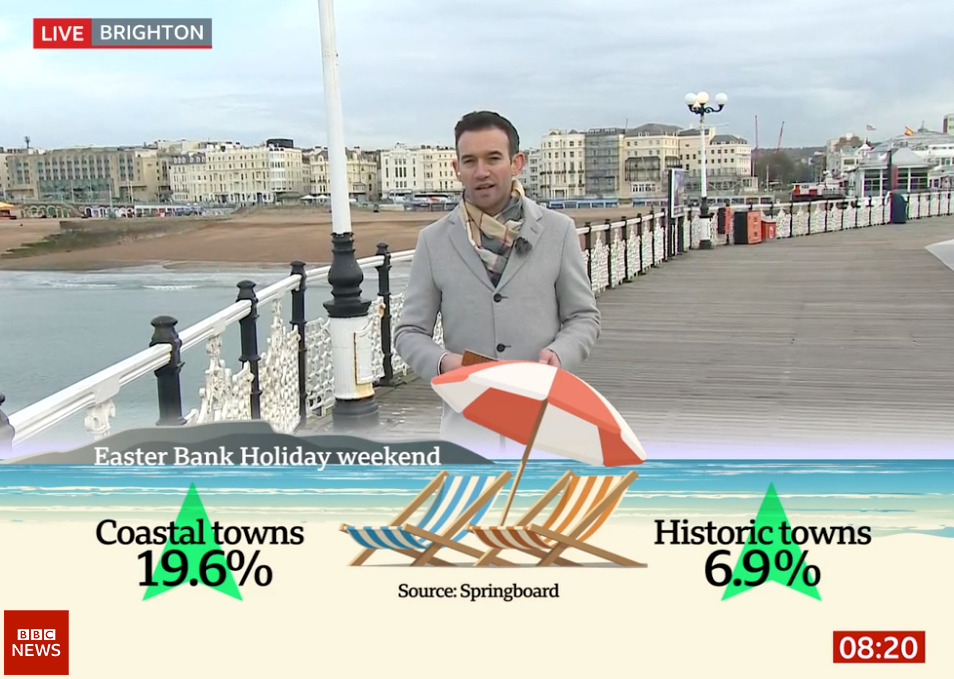 Retail Sector Footfall rises in lead up to Easter, but drops during weekend

Retail Week Data: Footfall bounces back in March as shoppers return to stores

London South East London close: Stocks mixed ahead of next round of peace talks

The Times – Scotland Storms and inflation keep Scots out of shops

The Guardian UK business activity strongest since June, led by travel and leisure; prices surge – as it happened

Retail Gazette January footfall down 20.8% but shoppers start to return to high street

RTE Dublin footfall up 22% after lifting of Covid restrictions

Retail Gazette Retail 2022: What to expect in the year ahead

Sky News Wilko: Hundreds of jobs at risk as home and garden retailer plans to shut stores with expensive leases

Daily Mail ‘Another nail in the coffin for the High Street’: Anger as Wilko reveals it will shut FIFTEEN stores this year putting 330 jobs at risk sparking calls for councils and landlords to slash cost of rent

Sky News Greggs affected by COVID-19: Consumer caution over Omicron takes a bite out of sales

City A.M. Shoppers shy away from West End on ‘critical’ weekend before Christmas as bosses call for urgent support

The Times Pubs and shops rue a nightmare before Christmas

The Guardian Bank of England’s Broadbent sees inflation over 5% soon; markets rally as Omicron fears fade – as it happened

GlobeSt Why Brick and Mortar Retailing Will Outlast the Global Pandemic

Retail Sector Footfall on the rise ahead of festive season

The Telegraph How did Black Friday get its name? The history behind why it’s the biggest sales event of the year

The Telegraph How did Black Friday get its name? The history behind the biggest sales event of the year

I News No Time to Die: Daniel Craig’s Bond movie credited with turning around fortunes of struggling UK cinemas

The Telegraph How did Black Friday get its name? The history behind the biggest sales event of the year

Retail Gazette UK footfall bounces back thanks to half-term

Retail Sector Footfall declines in lead up to half-term

City A.M. Drift to office slows as workers put off by Covid concerns

Retail Week Data: Footfall climbs in September as shoppers return to the office

City A.M. Covid pandemic accounts for around 15 per cent drop in retail footfall

The Times Returning to office workers give high street a boost

City A.M. London is back: Footfall boost as Brits return to city centres

Reuters Shoppers in central London up 6.5% as workers return to offices – Springboard

U.S. News Shoppers in Central London up 6.5% as Workers Return to Offices – Springboard

Metro US Shoppers in central London up 6.5% as workers return to offices – Springboard

The Guardian Visits to uK retail destinations fell by 4.2% last week, as the end of the summer holiday break hit shopping.

The Telegraph “Turning point for bricks and mortar”

Retail Week Data: Soaring footfall in August suggests light at the end of tunnel for retail

The Irish News Supermarket shopping behaviour moving away from stockpiling

The Guardian Despite UK’s vaccine success, it will take time for consumer habits to return

Retail Gazette Footfall up 3.3% in week of Freedom Day; but pingdemic hampers confidence

The Guardian UK’s economy ‘not out of the woods’ after lockdown, Bank of England policymaker warns

Evening Standard Retail and recruitment firms see growth ahead of ‘freedom day’, but normality a way off for some businesses

Retail Gazette Footfall to continue to strengthen over summer

City A.M. High streets see the most shoppers since the beginning of the pandemic

The Daily Telegraph 800,000 workers at risk of leaving central London in Covid exodus

The Daily Telegraph No full-time return for most London office staff, firms warn

The Economist Retail parks are well-placed to weather lockdowns

City A.M. Warm weather and half-term tempts shoppers back to the high street

The Times Rain pours cold water on the great reopening

We use cookies on our website to give you the most relevant experience by remembering your preferences and repeat visits. By clicking “Accept All”, you consent to the use of ALL the cookies. However, you may visit "Cookie Settings" to provide a controlled consent.
Cookie SettingsAccept All
Manage consent

This website uses cookies to improve your experience while you navigate through the website. Out of these, the cookies that are categorized as necessary are stored on your browser as they are essential for the working of basic functionalities of the website. We also use third-party cookies that help us analyze and understand how you use this website. These cookies will be stored in your browser only with your consent. You also have the option to opt-out of these cookies. But opting out of some of these cookies may affect your browsing experience.

Springboard Research Limited and Springboard Holdings Limited (Springboard) takes the privacy of our users seriously. We fully comply with all aspects of the General Data Protection Regulations (GDPR (EU) 2016/679).

We are committed to safeguarding the privacy of our users while providing personalised and valuable service. This Privacy Policy statement explains the data processing practices of Springboard including what personal data we collect from you and how we use that data.

Personal Data That We Collect

Your personal data (any information which identifies you, or which can be identified as relating to you personally for example, name, address, phone number, email address) will be collected and used by us. We’ll only collect the personal data that we need.

Springboard collects personal data to operate effectively and provide you the best experiences with our services. You provide some of this data directly, such as when you subscribe to our Benchmark Services, submit an enquiry or download an insights report. We also receive personal information from you every time you email us or send us your details.

We collect information automatically about your visit to our website. The information obtained in this way, which includes demographic data and browsing patterns, is only used in aggregate form. For more information on this please see our cookies section below.

Occasionally Springboard may seek, through a variety of means, the opinion about Springboard products or product related issues, of our customers, prospective customers and occasionally others who have been in contact with us. We may for example, conduct online surveys which ask you for personal information and demographic information (such as name, address, telephone number, email address, company size and areas of interest). We may use this information to enhance our marketing efforts and send you relevant information about our company and promotional material, but only if you have consented for us to do so.

If at any time you do not wish to receive communications from us and wish to be removed from our mailing list, you can do so by following one of the options listed in the ‘How to Access & Control Your Personal Data’ section below.

How We Use Personal Data

We’ll only use your personal data on relevant lawful grounds as permitted by the EU General Data Protection Regulation.

Personal data provided to us will be used for the purpose or purposes outlined in any fair processing notice in a transparent manner at the time of collection or registration where appropriate, in accordance with any preferences you express.

Your personal data may be collected and used to help us provide you with our products and services. This may involve communications for purposes such as informing you about your service or when we have maintenance scheduled on our Analyser system.

If you choose to hear from us we may send you information based on the things you’ve told us about as well as regular Benchmark Insights. We’ll only send these to you if you agree to receive them and we will never share your information with companies outside of Springboard for inclusion in their marketing.

We occasionally share data with our partners, but only with your consent to do so or to complete one of our services to you. Our partners include KDMC who support our installation process and MarketMakers who ascertain interest in our new services.

Carrying out a legal duty or as authorised by the Secretary of State.
Protecting vital interests of an individual or other person.
The individual has already made the information public
For monitoring for equal opportunities purposes
Providing a confidential service where the individual’s consent cannot be obtained or where it is reasonable to proceed without consent. (e.g. where we would wish to avoid forcing stressed or ill individuals to provide consent.)

The following are your rights under GDPR;

The right to object - Individuals have the right to object to: processing based on legitimate interests or the performance of a task in the public interest/exercise of official authority (including profiling); direct marketing (including profiling); and processing for purposes of scientific/historical research and statistics.
Rights in relation to automated decision making and profiling - The GDPR has provisions on: automated individual decision-making (making a decision solely by automated means without any human involvement); and profiling (automated processing of personal data to evaluate certain things about an individual). Profiling can be part of an automated decision-making process.
If you do not wish to be included in Springboard’s mailings a facility to unsubscribe is available at the end of each email. You can also request to remove your contact or other information held by us by emailing hello@spring-board.info.

Alternatively, you can send postal mail to the following address:

If you wish to request your personal information held by Springboard please visit our website request form.

Necessary Always Enabled
Necessary cookies are absolutely essential for the website to function properly. These cookies ensure basic functionalities and security features of the website, anonymously.
Functional
Functional cookies help to perform certain functionalities like sharing the content of the website on social media platforms, collect feedbacks, and other third-party features.
Performance
Performance cookies are used to understand and analyze the key performance indexes of the website which helps in delivering a better user experience for the visitors.
Analytics
Analytical cookies are used to understand how visitors interact with the website. These cookies help provide information on metrics the number of visitors, bounce rate, traffic source, etc.
Advertisement
Advertisement cookies are used to provide visitors with relevant ads and marketing campaigns. These cookies track visitors across websites and collect information to provide customized ads.
Others
Other uncategorized cookies are those that are being analyzed and have not been classified into a category as yet.
SAVE & ACCEPT